Saint Quotes and Feast Days for the Month of January

May the Saints & Feast Days for the month of January inspire you to grow closer to Christ Jesus.

Declaring that Mary was the Mother of God upheld an essential truth about Jesus Christ. He has two natures, one divine and one human, that were perfectly united  in Him as one divine person. A mother gives birth to a person and not a nature. Though Mary did not originate or generate God, she did bear Him in her womb and give birth to Him.

“When Elizabeth heard Mary’s greeting, the baby leapt in her womb. Elizabeth was filled with the Holy Spirit and cried out in a loud voice: ‘Blessed are you among women and blessed is the fruit of your womb. But who am I that the mother of my Lord should come to me?’” (Luke 1:41-43)

January 3: The Epiphany of the Lord

Epiphany means manifestation, and the Church celebrates this day the manifestation of our Lord to the whole world. He is revealed to the Magi, considered to be the first fruits of the Gentiles, and they lead in their wake all the peoples of the earth, and thus the Epiphany is an affirmation of universal salvation.

“May the splendor of your majesty, O Lord, shed its light upon our hearts, that we may pass through the shadows of this world and reach the brightness of our eternal home.” (Collect from Epiphany Mass)

St. John Neumann was born in the Czech Republic in 1811, came to America 1836, and was eventually appointed as bishop of Philadelphia in 1852. He is known for establishing Catholic schools and the 40 hours Eucharistic Adoration.

“How much do I love You, O my Jesus! I wish to love Thee with my whole heart, yet I do not love You enough. I have but one desire: that of being near You in the Blessed Sacrament.”

January 10: The Baptism of the Lord

January 22: Day of Prayer for the Legal Protection of Unborn Children

In all the Dioceses of the United States, January 22 is designated as a day of prayer and fasting for the full restoration of the right to life, and of penance for violations to the dignity of the human person committed through acts of abortion.

“A great prayer for life is urgently needed, a prayer which will rise up throughout the world. Through special initiatives and in daily prayer, may an impassioned plea rise to God, the Creator and lover of life, from every Christian community, from every group and association, from every family and from the heart of every believer.”  (Pope Saint John Paul II, Evangelium Vitae)

January 25: The Conversion of St. Paul the Apostle

“Saul, still breathing murderous threats against the Lord’s disciples, went to the high priest and asked him for letters to the synagogues in Damascus which would empower him to arrest and bring to Jerusalem anyone he might find, man or woman, living according to the new way. As he traveled along and was approaching Damascus, a light from the sky suddenly flashed about him. He fell to the ground and at the same time heard a voice saying, “Saul, Saul, why do you persecute Me?” “Who are you, sir?” he asked. “I am Jesus, the one you are persecuting””. (Acts 9:1-4)

“God highly exalted Christ and bestowed on Him the name above every other name, so that at the name of Jesus every knee must bend in the heavens, on the earth, and under the earth, and every tongue proclaim to the glory of God the Father: Jesus Christ is Lord!”. (Phil 2:9-11)

St. Timothy was a missionary traveling companion of St. Paul and was ultimately stationed in Ephesus, as their first bishop. It is believed that the pastoral letters from St. Paul, I Timothy and II Timothy, were written while he was at Ephesus. According to tradition, St. Timothy was stoned to death in Ephesus while protesting a feast to the goddess Diana, around 97 AD.

St. Titus was also a missionary traveling companion of St. Paul, who was eventually assigned to Crete and ordained as their first bishop. The pastoral letter from St. Paul to St. Titus was written while he was in Crete. According to tradition, St. Titus died from natural causes at the age of 97.

“For the grace of God has appeared for the salvation of all men, training us to renounce irreligion and worldly passions, and to live sober, upright, and godly lives in this world. Awaiting our blessed hope, the appearing of the glory of our great God and Savior Jesus Christ. Who gave Himself for us to redeem us from all iniquity and to purify for Himself a people of His own who are zealous for good deeds.” (Titus 2:11-14)

One of the greatest theologians of all time, St. Thomas had a vision of Christ during Mass four months before he died. After this vision he stopped writing the Summa Theologica commenting “I can do no more. Such secrets have been revealed to me that all I have written now appears to be of little value”. Even though Christ had declared to St. Thomas in another vision, that St. Thomas had written well of Him, St. Thomas saw that the difference between his inspired reasoning and the glory of God was vast.

Our desire is that the Saints and Feast Days quotes for the month of January helps you to better live out your Catholic faith. Check out our Welcome His Heart Enthronement kit below. 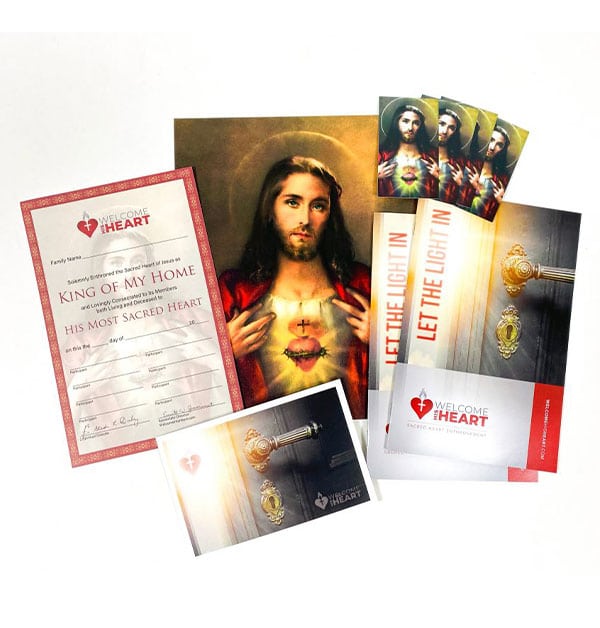 Each Welcome His Heart Kit Includes:

Available in both English and Spanish.

Click in the donation box to set your donation amount.