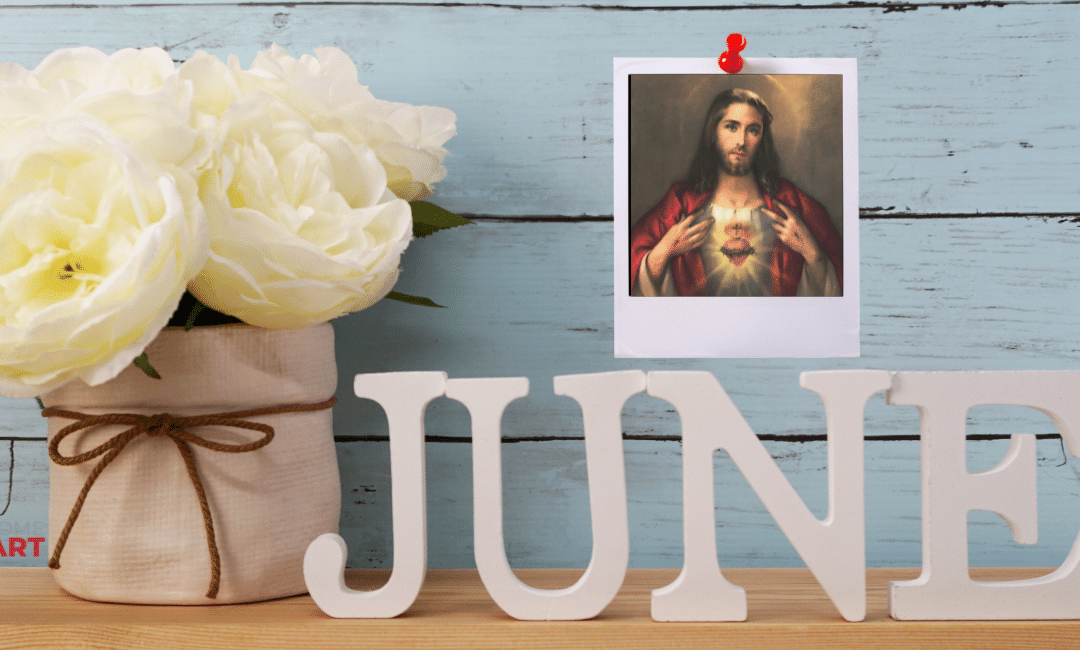 May the Saints & Feast Days for the month of June inspire you to grow closer to Christ Jesus. June is dedicated to the Sacred Heart of Jesus and the great feast of the Sacred Heart is June 11th, 19 days after Pentecost.

June 6: Most Holy Body and Blood of Christ (Corpus Christi)

Corpus Christi (Body and Blood of Christ) celebrates the Real Presence of Jesus Christ in the Holy Eucharist—Body, Blood, Soul, and Divinity. This feast day was established as a result of a Eucharistic miracle which occurred in 1263 and was confirmed by Pope Urban VI. This miracle occurred, when for the first time in the history of the Church, there was a debate among certain theologians about the Body and Blood of Christ actually being present in the consecrated bread and wine. In 1264 Pope Urban established this feast day and St. Thomas Aquinas composed the liturgy and the office.

“What is more wondrous than this Holy Sacrament! In it bread and wine are changed substantially, and under the appearance of a little bread and wine is Christ Jesus, God and perfect Man. In this sacrament sins are purged away, virtues are increased, and the soul is satiated with an abundance of every spiritual gift.” – St. Thomas Aquinas

June 11: The Feast of the Sacred Heart of Jesus (19 Days after Pentecost)

While devotion to the Sacred Heart of Jesus has a long and ancient history, this feast day is relatively recent. The Solemnity was first celebrated in France. The liturgy was approved by the local bishop at the request of St. John Eudes, who celebrated the Mass on August 31, 1670. The celebration was adopted in other places in France. In 1856, Pope Pius IX established the Feast of the Sacred Heart as obligatory for the universal Church.

“By encouraging devotion to the Heart of Jesus, we encourage believers to open themselves up to the mystery of God and of His love, and to allow themselves to be transformed by it. It is a fitting task for Christians to continue to deepen their relationship with the Heart of Jesus, in such a way as to revive their faith in the saving love of God and to welcome Him into their lives.” – Pope Emeritus Benedict XVI.

Devotion to the love and virtues of the Heart of Mary dates back to early Christianity, inspired by Simeon’s prophecy “that a sword will pierce through your own soul” (Luke 2 35) and culminating with Mary’s presence at the foot of the Cross. St. Augustine says that at the foot of the cross “Mary cooperated through charity in the work of our redemption”.

The actual feast day was first celebrated by St. Jean Eudes in Autun, France in 1648 and afterwards in a number of French dioceses. From there the feast spread to other dioceses under popes Pius VI and VII. After the revelations of the Miraculous Medal in 1830, and the establishment of the Archconfraternity of the Immaculate Heart of Mary, refuge of sinners, the Congregation of Rites finally approved the Office and Mass of the Most Pure Heart of Mary in 1855.

“Oh Mary, conceived without sin, pray for us who have recourse to thee”. – Prayer from the Miraculous Medal.

June 24: Solemnity of the Birth of St. John the Baptist

There are only 2 saints in which we celebrate their birth, the Blessed Mother — in which we celebrate her Immaculate Conception — and St. John the Baptist. It has been a long held belief in the Church, though not an official dogma or papal proclamation, that St. John was born (not conceived) without original sin. This is based on the passage in Luke describing the Visitation “when Elizabeth heard the greeting of Mary, the child leaped in her womb; and Elizabeth was filled with the Holy Spirit” (Luke 1:41).

The Catholic Encyclopedia states, “As the presence of any sin whatever is incompatible with the indwelling of the Holy Spirit in the soul, it follows that at this moment Johnthe Baptist was cleansed from the stain of original sin.” St. Augustine also noted that the reason for this feast day is the church’s common belief that John entered the world freed (in the womb) from original sin.

“And you child, will be called the prophet of the Most High; for you will go before the Lord to prepare His ways, to give knowledge of salvation to his people in the forgiveness of their sins, through the tender mercy of our God.” – Luke 1: 76-78.

In 1928, during a spiritual retreat, Fr. Josemaria was inspired to found Opus Dei, a way of sanctification in daily work and in the fulfillment of the Christian’s ordinary duties. St. Josemaria died in Rome on June 26, 1975. By the time of his death, Opus Dei had been

founded in dozens of countries. After his death thousands of people, including more than a third of the world’s bishops, sent letters to Rome asking the Pope to open his cause of beatification and canonization. On October 6, 2002, St. Pope John Paul II

canonized him before a multitude of people from more than 80 countries. In his discourse to those who attended the canonization, the Holy Father said that “St. Josemaria was chosen by the Lord to proclaim the universal call to holiness and to indicate that everyday life, its customary activities, are a path towards holiness. It could be said that he was the saint of the ordinary.” “Great holiness consists in carrying out the little duties of each moment”. – St. Josemaria Escriva