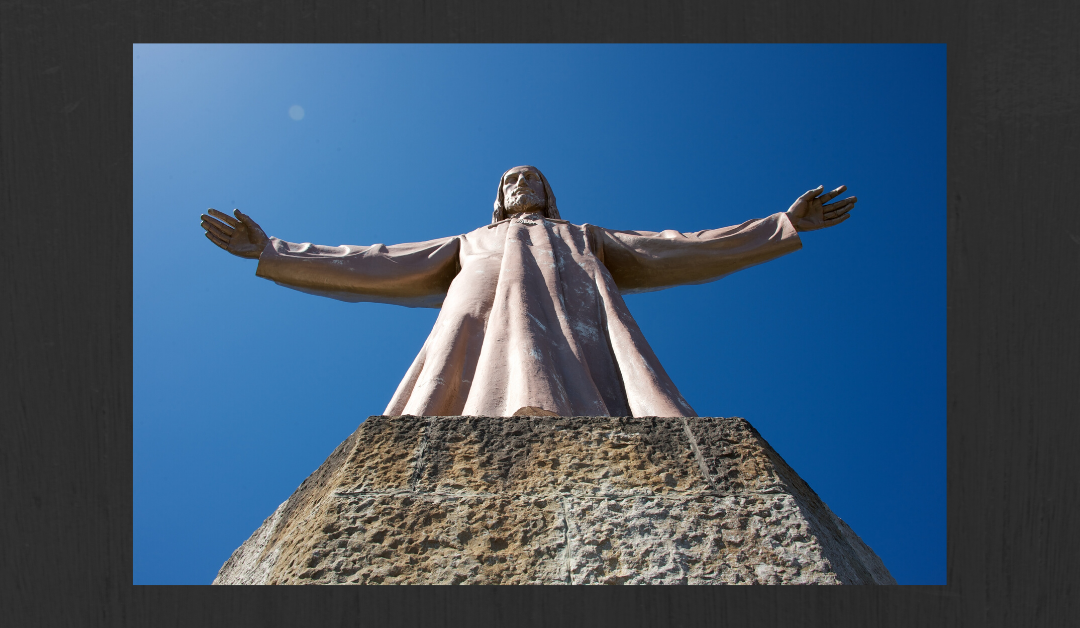 “Jesus, remember me when you come into your kingdom.”

There was nothing about that moment that appeared Royal. Jesus did not appear to be a King in any way. He was dying the worst form of death that the Romans had perfected. Crucifixion was so bad it was below the dignity of Roman citizens, even the worst of their criminals. It was reserved for non-Romans, for “Roman slaves.” A sign hung over his Cross ordered to be put there by Pontius Pilate, “This is the King of the Jews.” A sign of mockery. Yet, “the good thief” as Tradition speaks of him, a convicted criminal being crucified next to Jesus, was able to see through that moment and was able to recognize Jesus as King. His kingdom was not of this world. He would say to Christ the King, “remember me when you come into your kingdom.”

It is becoming increasingly difficult to recognize Jesus as King in our own time, and yet, like the “good thief”, we are called to recognize Him as King. This is an urgent call with profound consequences.

The feast of Christ the King is encouraging, challenging, and prophetic.

It is encouraging because we celebrate a present reality. Jesus Christ is King. Nothing can take away his kingship. It does not depend on us, on our recognizing Him as King for Him to be King.

It is a challenging feast because we are confronted with the question: Is Jesus Christ my King? Your King? In every dimension of our lives? Perhaps there are areas in our life where He is King, and yet, we are forced to ask ourselves, Is Jesus Christ King in every aspect of my life?

It is a prophetic feast. A fairly recent feast on the liturgical calendar, instituted in 1925, it remains a prophetic call to establish Jesus Christ as King in every dimension of life.

In 1925 the world was still recovering from the “Great War”, World War I, that raged from 1914-1918. There was nothing “great” about the war. During the war, there were over 40 million military and civilian casualties. Of those, an estimated 15-19 million died during the war. 32 Countries were involved in the War by the time it was over. It was a profound human tragedy. And, all of the countries involved had strong historically Christian roots. A profound tragedy that raised serious questions.

Pope Pius XI, in 1925, wrote a letter called Quas Primas (“On the Feast of Christ the King”) to identify the root causes of this tragedy and to point to the solution. And, in that letter, he instituted this great feast to be a perpetual prophetic call to live the truth that Christ is King as the only way to restore and keep peace.

The letter begins with these words: “In the first Encyclical Letter…we referred to the chief causes of the difficulties under which mankind was laboring…saying that these manifold evils in the world were due to the fact that the majority of men had thrust Jesus Christ and his holy law out of their lives; that these had no place either in private affairs or in politics: and we said further, that as long as individuals and states refused to submit to the rule of our Savior, there would be no really hopeful prospect of a lasting peace among nations. Men must look for the peace of Christ in the Kingdom of Christ.” (Quas Primas, 1)

The tragedy of the First World War was the result of the failure to live the truth that Jesus Christ is King. This failure started in individual hearts, and then families, and then communities, and then nations, and, ultimately, contributed to the devasting First World War. Pope Pius XI wrote the letter and instituted the feast as a prophetic gesture. If only the world had heeded the message. 15 years later, the world was engulfed in an even “greater” war with even more tragic consequences, known at the Second World War.

And, just as the world needed to be called to live the truth that Jesus Christ is King in 1925, so to we need that call today. Perhaps more than ever.

We are called to have Christ be the king of our minds, of our free will, of our affections, of our priorities, of every aspect of our lives.

I am reminded of St. Paul’s letter to the Ephesians, “be renewed in the spirit of your minds” (Ephesians 4:23) and in his letter to the Romans, “Do not conform yourselves to this age but be transformed by the renewal of your mind, that you may discern what is the will of God, what is good and pleasing and perfect.” (Roman 12:2)

In college I had the opportunity to read “The Great Books”. We read the western cannon of great books starting with Homer my Freshman year and ending with the 20th century philosophers. As I read the Great Books, I also studied history. A simple fact emerged: ideas have consequences. Ideas shape history. The ideas of one century shape the life of the next. The ideas of the 19th century laid the foundation for the tragedies of the 20th century (e.g. communism, socialism, two world wars, etc.)

Recently I had a conversation with a young priest from the Czech Republic. He was born just after the fall of communism. However, the story of communism in his native land was the story of his parents and grandparents, and so, it was very much his story. He grew up in an exciting time for the Church in the Czech Republic. There were new freedoms that the Church enjoyed. Seminaries were built and were full. There was tremendous optimism. During this time, the “Western” influence also came in: The air we breathe and take for granted.

Secularism, the exclusion of faith from the public sphere.

The sexual revolution, and all of its confusion and consequences.

And now, the Church in the Czech republic is struggling again. The seminaries that were built and once full are now struggling to stay open due to a lack of seminarians.

This is the air that we breathe. An enemy that is invisible. The assumptions of our present society.

The very basis of our civilization, marriage and family, are under attack.

Our society was founded on basic truths that today are questioned and opposed.

Marriage is a lifelong covenant between one man and one woman that is permanent, faithful, and open to life. Marriage is part of God’s plan of creation. We have no authority to redefine marriage.

Today, because of forces like secularism and relativism, because of the agenda of the sexual revolution, we have been bullied into believing that religious freedom means that we have the right to state our beliefs in the privacy of our homes and in the four walls of our churches. We are told that we cannot bring our faith and our values into the public square, into the public sphere, as that is “imposing our faith”. And yet, as we cower in the walls of our churches, others have brought their values into the public square. Values that are not ours, that are not part of our civilization, that are opposed to marriage, family life, and the thriving of the human person. So called “values” that threaten the very foundation of the civilization that we live in.

Today’s feast is an urgent call to return to the One who alone can save us. We are called to promote the Kingdom of Christ in every dimension of life.

An encouraging, challenging, and prophetic feast.

“Jesus, remember me, when you come into your kingdom.”